Stories of People in the Upstream Diamond Industry 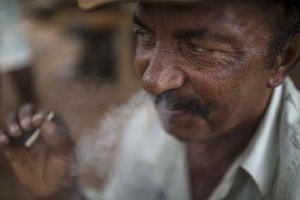 View a story featuring Mohammed Dabo Mohammed Dabo, 45, has spent day after day for 25 years knee deep in mud. He’s one of about 150,000 miners in Sierra Leone, South Africa. Mohammed and his fellow miners are the first people to touch the rough stone that becomes a fine polished gem, a world away from their impoverished lives.

For this they earn less than three dollars a day. From their position at the beginning of the pipeline, the miners have little idea how much the stones are worth once they pass from their tired hands through the export chain and out of their country en route through the global pipeline and onto the hands of brides around the world. Mohammed calls the work slavery, but in a country where there is little other employment, it means survival.

Every day of backbreaking work is driven by his desire to send his children to school – an opportunity he never had. He refuses to let his four boys and three girls follow his path in the diamond mines. God will reward him with a big diamond one day, he believes, turning his and the next generation’s luck around. 11 years of civil war in Sierra Leone created endless setbacks for Mohammed and his family.

His house was burnt down and his uncle murdered. He fled with his family to neighbouring Guinea where they remained in a refugee camp until it was safe to return. Recently, his father, formerly the village chief, died. Mohammed, in turn, became chief and the responsibility of providing for his large extended family became his alone. He says, without self-pity, “As long as there is life, opportunity can open up for me in this world. And I’m looking for it.”

For a list of diamond mining issues, read this: http://www.ddiglobal.org/artisanal-mining/issues

At 13, Manoj left his family in rural Gujarat for a job in the big city of Surat, India. Manoj is one of thousands of child diamond cutters in India, the biggest diamond-cutting centre in the world. Years of drought have devastated his family’s cotton farm. Now, Manoj is slowly becoming the family breadwinner.

He learned during a three-month, unpaid, and nerve-wracking apprenticeship to cut and polish tiny diamonds in one of the many small factories and household shops in the tightly packed diamond-centre. Stones once thought too small for jewelry, some hardly bigger than a grain of sand, require small, steady hands to cut. One mistake at the wrong moment and the stone is ruined.

Manoj’s father tried his luck at cutting diamonds before Manoj. But, he worked slowly and could not secure enough employment to support his family. Instead Manoj, a wise and sensitive child, volunteered to move in with his cousin in Surat attesting, “I might be small but my brain is large.” He now provides enough money so that his younger brother and sister can go to school.

Manoj himself has the equivalent of a grade seven education. His great sense of duty as the eldest son spurs him towards a future in diamonds. They are his life now; this is how his family will survive. His parents take great pride in Manoj’s achievement. They consider their oldest child a craftsman and an artist.

Akshay Mehta is obsessed with his work and with his family. The two are inextricably tied. Akshay is at the helm, along with his two brothers Anuj and Ashit, of The Blue Star Group, one of India’s largest polished diamond manufacturers. The business began in 1966 when Akshay’s father, Vasantlal, founded the company in Mumbai after leaving his humble roots in the town of Palanpur.

Akshay, his wife Smita, and their family are ethnic Jains, followers of an ancient religion that embraces nonviolence and vegetarianism. Jains account for only 0.4 % of India’s population but are well represented in the country’s diamond trade. The Palanpuris, from the town of Palanpur, form a close-knit, religious community, a way of life that remains important to Akshay Mehta as he negotiates the chaotic streets and business dealings of busy Mumbai.

For Akshay, faith, fiscal growth and family are not mutually exclusive. He is unapologetic about keeping the family business healthy and strong, and has passed on these values to the next generation of the diamond dynasty. “Family is the biggest asset I have. And the key element of this is sacrificing. It has to be the business and the family.

That should come first, ahead of any one individual,” states Akshay’s eldest son Arjav. The Blue Star Group is now bringing into the fold the third generation of Mehtas. In 2002, Arjav, joined the business, followed by Arnav, his younger brother in 2004. About nine families run the 12 billion dollar diamond business in India. Just two generations have taken the Mehta family from modest beginnings to great wealth.