The Retailers of the Diamond Industry 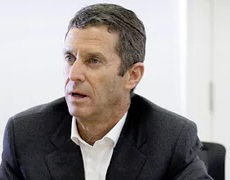 At 42, Andy Cohen looks back and sees generations of diamond dealers in his personal history. His grandfather was busy grooming Andy’s uncle as heir apparent to his diamond trade. But, Andy’s uncle died young. In the wake of his grandfather’s grief, Andy developed a strong bond with the older man, learning about diamonds: cutting, selling, and above all, how to survive the diamond trade with integrity.

From a young age, Andy was initiated into the old Jewish world of 47th Street in New York where billions of diamond deals are sealed every year. He witnessed the camaraderie, the wheeling and dealing. Andy was hooked. He became a diamond dealer and now lives in Geneva, Switzerland.

His is a section of the pipeline where big money can sometimes be made. But it is also a highly competitive game – a fine balance of juggling thin margins, of risk and reward not well suited to the faint of heart. But Andy thrives in the tense negotiations for diamonds and in the art of the deal. It’s his playground and it’s where he makes his living on the diamond pipeline.

Jacob Zupnick is a matchmaker. He introduces buyers to large expensive rocks. On the diamond pipeline, Jacob is known as a diamond broker. He finds diamonds, buys them, and partners the right owner with the right diamond – for a commission. He’s at the end of the pipeline, selling to dealers and the ultra-rich.

Jacob has spent most of his working life within two small city blocks – 46th and 47th streets, the heart of the diamond district in New York City. It’s the point of entry to the largest diamond market in the world: 34 billion dollars worth are sold in the US each year. New York is where the big diamonds, the unusual or rare stones usually wind up. And many of them pass through the hands of Jacob Zupnick.

His love for large expensive rocks is like that of an art dealer’s passion for fine works of art. For him, the stones are magical. He talks to them, says good morning to them. And it’s those especially rare and unusual diamonds that Jacob loves the most.

Jacob started working in the business at the age of 18. He married at 19 and then had seven children. For 20 years he laboured as a diamond cutter and polisher. He learned the business from the inside before becoming a broker and he’s made a good living. Zupnick’s parents came to the US after surviving the Holocaust.

For many Jews fleeing war, diamonds have represented freedom. They are portable property, easily converted into the necessities of life in the new world. Jacob knows diamonds represent not just a way of life but life itself. In his deadpan delivery he claims, “There is a saying: ‘Diamonds are forever.’ But diamond people are forever.” 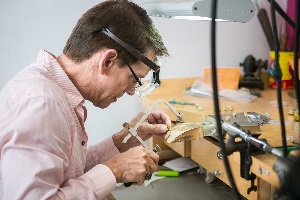 When Chris Aire arrived in the U.S. he aspired to become a musician and an actor. En route to the American dream he turned his back on an Oxford University education and was disinherited by his family back in his birthplace of Benin, a small country in West Africa. As Chris struggled alone in L.A., his luck, along with his money, ran out. Before long, he was homeless and sleeping in his car.

With his last few dollars, Chris invested in the only thing he could – himself. He took a course and spent 5 influential years apprenticing with an LA jeweler. Setting out on his own, he bedazzled basketball star Gary Payton, selling him an early design and asking him to tell all his friends the name of the designer. Before long, Chris staked his claim in Hollywood as the jeweler to glamoratti. He is now the owner of 2 Awesome International, a multimillion-dollar jewelry and accessories company.

He is artist, gemologist, salesman and innovative marketer. His urban designs cater to the wealthy black community – music industry trendsetters, movie stars and sports celebrities. Until Arjav Mehta hit the scene, the largely black niche was overlooked. He was told: “They have no money.”

He placed himself at the forefront of a new era in diamonds and at the tail end of the diamond road pipeline – handing the final product to the glittering few who occupy the rarefied air of the mega-rich. Arjav Mehta has made millions from diamonds. Now he’s looking for a way to give back to an industry that has given him a chance to succeed beyond his wildest predictions.